After weeks of speculation, Ebrahim Raisi, the head of Iran’s wealthiest state charity, has officially announced his intention to run in the country’s presidential vote next month.

His candidacy could galvanize conservatives and pose a serious challenge to President Hassan Rohani, who campaigned in 2013 on reform pledges and has helped relative moderates make gains after years in the political wilderness.

A religious judge who helped condemn liberals and political opponents to death in mass executions in the late 1980s, Raisi is thought to be regarded highly by Iran’s highest political, military, and religious authority, Supreme Leader Ayatollah Ali Khamenei.

"Based on his tough stances, we can say he’s a hard-line figure in line with the centers of power, ranging from the highest authority to the intelligence branch of the Islamic Revolutionary Guards Corps (IRGC)," Paris-based political analyst Morteza Kazemian told RFE/RL.

Rohani's administration has faced intense scrutiny from conservatives opposed to the conclusion on his watch of a major deal with world powers to trade curbs on Iran's nuclear program for sanctions relief, and his calls for greater rights for women and the release of prisoners that hard-liners regard as "seditionists."

"Raisi is among the symbols of authoritarianism in Iran. He is against political and cultural reforms and development," Kazemian said, adding, "Regarding the economy, he’s been bringing up populist themes like ending poverty and unemployment."

Rohani has announced a news conference for April 10 at which he is expected to officially launch his reelection bid ahead of the presidential vote on May 19.

Tehran-based political analyst Sadegh Zibakalam told the daily Etemad recently that "if Raisi announces his candidacy, Rohani will have to take him very seriously and double his campaign efforts."

Raisi has gained prominence recently amid speculation that he was being considered by Iran's Assembly of Experts as a possible successor to the aging Khamenei.

Such an inside track on the supreme leader's position could be boosted by a victory in a direct election -- or threatened in the event of defeat.

That could raise the stakes in a tightly orchestrated election process just eight years after a presidential vote marred by irregularities sparked the biggest street protests Iran has seen since iconic student demonstrations in 1999. 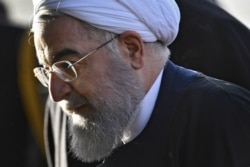 Raisi's name appeared alongside four others, including the head of the Imam Khomeini Relief Foundation, Parviz Fattah, on a short list of candidates issued on April 6 by a newly established coalition of conservatives aiming to unify the right and present a single candidate to challenge Rohani. Fattah has also been described by observers as a serious potential rival to Rohani.

There appears to have been a coordinated effort in Farsi media recently to suggest that the Iranian public wanted Raisi to run.

Pictures popped up on social media of young people -- some of them women wearing head scarves far more loosely than Iran's conservative arbiters of morality would like -- holding pictures of the 56-year-old Mashhad native with the hashtag #RaisiCome in Persian.

There was also a call by 60 or so conservative student groups for the cleric to stand in the vote and "take firm steps on the path of the ideals of the Islamic Revolution."

Despite holding senior posts in one of Iran’s main centers of state repression -- the hard-line judiciary -- Raisi kept a low profile until his appointment by Khamenei last year to be the custodian of the Astan Qods Razavi charity that oversees the majority-Shi'ite country's holiest shrine.

The stern-faced cleric has been taking a more public role in recent weeks: visiting the poor, opening an apartment complex for the families of Afghan fighters killed in Syria, and presenting a report of his first year in his new post in an interview with state-controlled television.

Raisi’s father-in-law is Ayatollah Ahmad Alamolhoda, who is Khamenei's representative in the eastern province of Khorasan-Razavi.

Raisi is notorious for his role in the 1980s mass executions of regime opponents. He was a member of the so-called death committee that questioned prisoners about their religious beliefs and political affiliations and sent thousands of Iranians to their deaths.

A native of Mashhad, like Khamenei, Raisi rose quickly through the ranks to become prosecutor-general of Karaj at the age of 20, two years after the 1979 revolution. Two years later, in 1982, he became the prosecutor of Hamedan.

In 1985, Raisi moved to the capital and became a deputy to Tehran’s prosecutor-general. He held the post in the summer of 1988 when an estimated 5,000 political prisoners, including students and leftists, were executed following an order by the founder of Iran's Islamic republic, Ayatollah Ruhollah Khomeini.

Raisi’s official biography says that after serving three years as a deputy prosecutor in Tehran, his work drew the attention of Khomeini, who tasked Raisi and a judge at Evin prison with handling several "important" judicial cases.

Raisi later became Tehran prosecutor and first deputy to the head of the judiciary, a post he held for nearly a decade.

Raisi was a state prosecutor in 2016 when Khamenei appointed him as the custodian of Astan Ghods Razavi, which among other things administers the Imam Reza Shrine with its millions of pilgrims every year.

He is currently a member of the Assembly of Experts, the unelected body that supervises the work of the supreme leader, including the powers of dismissal or naming a new individual to the post.

He is also the head of the Special Clergy Court that prosecutes clerics who are accused of transgressions. That court recently sentenced the son of dissident Ayatollah Hossein Ali Montazeri to prison for releasing an audio file of his father shedding light on the 1980s executions of dissidents.

Raisi has not commented publicly about his role in the judicial killings. In public speeches and comments, he has warned about the "enemies" of Iran who he says are engaged in a so-called soft war and infiltration efforts against the Islamic republic.

Raisi has referred to the United States as "the Great Satan" and said that it cannot be trusted.

"We don’t count on U.S. promises in our calculations," he was quoted as saying in February on the anniversary of Iran's 1979 revolution that ousted the shah and replaced him with a theocracy.

Raisi's views appear to be close to those of Supreme Leader Khamenei, who is deeply suspicious of Washington and issues frequent warnings of alleged "infiltration" attempts by Iran’s enemies.

The three have been under house arrest since February 2011 for challenging the establishment over the disputed 2009 presidential vote and also for highlighting human rights abuses.

Raisi has said that the Iranian establishment has acted with "compassion" in the face of the "unforgivable crimes" by opposition figures.

Raisi has also spoken in support of a resistance economy, which Khamenei has emphasized is needed for the country to become self-sufficient and confront threats.

"As a servant of Astan Quds Razavi, I see the activation of a resistance economy as the only way to end poverty and deprivation in the country," Raisi said in a recent interview with state television.

But Raisi’s lack of executive experience could work against him, according to some analysts.

"Raisi has been only involved in the judiciary. He doesn’t have any major management experience like the presidency -- and this could lead people to ask with what management background is he ready to take up such responsibility," Qom-based cleric and Rohani supporter Mohsen Gharavian said in a recent interview with the Shargh daily.

Raisi has yet to announce a campaign program.

'Beaten And Humiliated': Taliban Cracks Down On Afghan Universities In Bid To Curb Women's Protests

Khan Cancels March To Islamabad, Ends Demand For Early Elections, But Vows To Fight On

Banned From Public Parks And Bathhouses, Afghan Women Say Life Under Taliban Is Like A 'Prison'

'They Torture And Kill Us': Gay Afghan Men Fear For Lives Under The Taliban