Taking Down A Powerful Ally Of Convenience In Tajikistan

Taking Down A Powerful Ally Of Convenience In Tajikistan
share

The current chairman of Tajikistan's Majlisi Milli, the upper house of parliament, is slowly being stripped of all of his once-formidable powers.

For most of Tajikistan's 25 years of independence, Mahmadsaid Ubaidulloev has been one of the most influential people in Tajikistan and was possibly the most powerful person in the country for a brief time.

The Tajik government is turning into what could be seen as a family business and it was probably inevitable that Ubaidulloev (maybe especially Ubaidulloev) would be removed from the political scene.

All the governments of Central Asia have their gray cardinals or other similar figures, without whose help it would be difficult for the region's leaders to rule.

The process of methodically undercutting Ubaidulloev's influence in Tajikistan is interesting because it shows what can happen when a leader feels comfortable enough to move against yesterday's ally of need.

The most public example of Ubaidulloev's fall from grace came on January 12 this year, at a session of the Dushanbe City Council when Tajik President Emomali Rahmon's 29-year-son Rustam was appointed mayor of Tajikistan's capital, a post Ubaidulloev had held for some 20 years.

But Ubaidulloev's fall started earlier than that.

Two years ago, the head of the Dushanbe department for construction, Saidsharif Anvarov, was detained along with several other people. 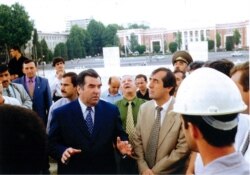 One of Ubaidulloev's claims of success as mayor of Dushanbe has been the renovation of the Tajik capital, but it now appears that not all the money allocated for projects to modernize and beautify the city were actually spent on its intended purpose.

Anvarov has been a close associate of Ubaidulloev since around 2000 and was seen by some as being the former mayor's "right hand." He was head of the Dushanbe construction department for more than a decade before being detained.

In April, in a move that was every bit as significant for Ubaidulloev's future as losing the mayor's job, a Dushanbe court found Anvarov guilty of bribery and embezzlement during the construction of the Istiqlol medical center in the Tajik capital and sentenced him to 18 years in prison. It also ordered him to pay compensation amounting to some nine million somoni ($1.1 million).

Anvarov was not the only associate of Ubaidulloev put on trial.

Fazliddin Mahmudov, the head of the construction company Tojikkolkhozsohtmon, and his deputy Firuz Rahmanov, were sentenced to 18 years and five years in prison, respectively, for misuse of funds intended for the construction of low-income housing in Dushanbe.

Rahmanov was arrested as he was giving a bribe, on behalf of Anvarov, to officials from the national anticorruption agency of some $450,000. It represents an enormous sum in a country where the average yearly wage is less than $3,000

Mahmudov, like Anvarov, was ordered to pay nine million somoni in compensation.

Other associates of Ubaidulloev, who were all in charge of companies involved in Dushanbe construction, have also been found guilty of wrongdoing.

Which brings us back to Ubaidulloev.

Once he was all but untouchable. Even Tajik President Emomali Rahmon had to tread carefully in dealing with him.

But now Ubaidulloev's support base has been chipped away and there are few, if any, left who could come to his aid.

President Rahmon told a February 15 meeting of Dushanbe officials and businessmen that some $100 million had been misspent in the construction of the Dushanbe Plaza complex and Istiqlol medical center. Ubaidulloev was ultimately responsible for both those projects..

Rahmon has tasked his son Rustam Emomali with leading the investigation into what happened to the money. He is supposed to have the findings ready by July 1.

That's probably the last day Ubaidulloev will be head of the Majlisi Milli and possibly one of the last days he will be a free man.

The views expressed in this blog post do not necessarily reflect the views of RFE/RL.